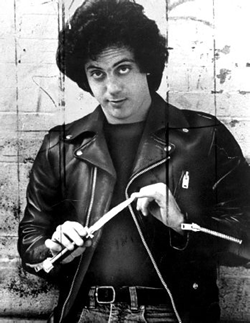 I came of age in suburban Staten Island during the 80’s, back when you couldn’t hang on the stoop without someone blasting Billy Joel from a boombox. Even my Italian grandparents loved “that little Jew.” They would pop in an 8-Track of The Stranger or 52nd Street in the Caddy on our trips to the city. I’d time it so the title track on The Stranger would blossom just as we popped out of the tunnel into the Battery.

My friend was more fanatic and would dress like Billy Joel… jacket, tie and jeans. I always looked like a shlub next to him. I was infatuated in my own less demonstrative way. I listened to a lot of those albums exclusively for years, took it personally when anyone criticized Billy, and wore out my VHS of Live from Long Island pretty quickly.

That being said, I’m not into many of the hits anymore. With 33 songs in the top 40, that’s a lot of songs to ignore. Don’t get me wrong, I had a ball at Brooklyn Bowl watching Gene Ween sing them live, but I’m not alone in never wanting to hear Piano Man or goddamn Uptown Girl again, am I? Billy has to be sick of those songs, too.

So what are some overlooked gems from the Billy Joel catalog? I thought you’d never ask.

Ok, I’m gonna start with an obvious one. Obvious to fans, that is. Let me be clear by saying good Billy Joel songs are not “overlooked” by fans, just by Joe Shmoe who probably only knows a fistful of hits.

As a ten year old in 1980 my only experience with women was a quick kiss here and there, yet lyrics like “I don’t wanna eat, I don’t wanna sleep, I only want Leyna one more time” spoke to the part of me that gave into obsessions. Granted most of my obsessions involved eating entire boxes of Cap’n Crunch when no one was looking, but there was definitely a girl or two I couldn’t get off my mind during all that crunching.

All For Leyna is Joel several albums away from his sweet and folksy debut. By now he’s heard The Police and wants in. My English teacher thought Glass Houses was the best example of Billy Joel selling out. He probably also thought Dylan sold out when he went electric. Whatever. At their core, these guys are entertainers, and entertainers like to make crowds happy. Billy started in a piano bar, for chrissakes.

My pal and I used to hang out in SoHo in our early teens and if we ever found ourselves in a sketchy neighborhood we starting mouthing the intro music to this song. It somehow represented something gritty and urban to us, which is so off the mark listening to it now. Sounds more like Jimmy Buffet taking a cab through the Lower East Side. Totally listenable, totally seventies with some great slide guitar and background vocals. I wish Billy would do smaller venues playing songs like this instead of his usual live stuff.

You won’t look cool blasting this at full volume cruising down the bully, that’s for sure. It kinda sounds like white people getting dressed for an early supper. Almost like a James Taylor or Carol King cover, but it’s a Billy original, yo.

I’ve never heard it outside playing it for myself. Not on the radio, not in concert, never heard fans talking about it. Yet to me it’s the perfect little pop song. A little light lyrically, but Stevie Wonder could have a field day funking this love song up.

“I got remote control and a color TV. I don’t change channels so they must change me.”
This is drunk and probably stoned Billy uncharacteristically rocking out and letting loose in a way that made fans of Piano Man skip to the next track. I love it and I’m sure I’m not alone. I wish he made more balls to the wall songs like this.

Sung via the same impatient point of view as Pressure from The Nylon Curtain, it’s another litany of modern day anxiety encapsulated in four minutes of rock. It’s a road-house stomper that doesn’t take itself too seriously – which Joel is sometimes guilty of.

“Don’t look now but you have changed.”

The ghost of John Lennon walks the halls of The Nylon Curtain in ways Joel never allowed before or since. I used to think this was Joel’s best record, and it certainly has a lot of great songs on it, but let’s be honest; it’s no 52nd Street. In fact, I forced myself not to include anything from 52nd Street on this list because that record belongs on a different list altogether.

The Nylon Curtain is famous for Allentown, Pressure and Goodnight Saigon, but Surprises, Laura, and A Room of our Own are the best tracks if you ask me, and you didn’t. It’s grown-ass suburban music fo’ shizzle. That he followed this record with a concept album exploring doo-wop is still jarring.

And so it goes… 5 overlooked tracks among many possible choices by a guy who has sold more than 150 million records worldwide. He even got to keep some of that money.

Now if only we could get him to write something new.

Related Topics:Billy JoelListiclePopular
Up Next

Believe in Something Else

As they prey we pray?