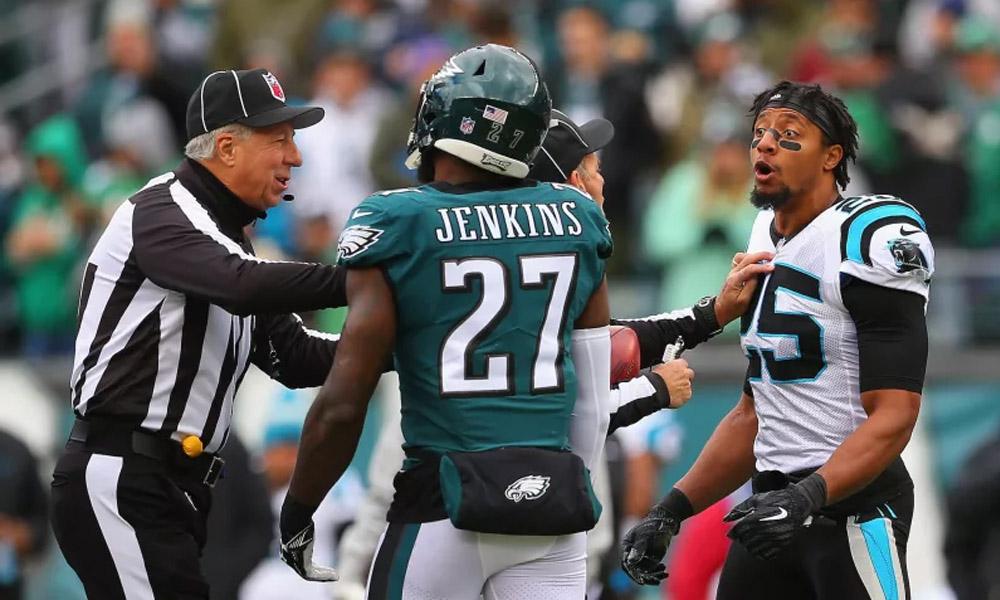 This past Sunday, the Philadelphia Eagles hosted the Carolina Panthers. Prior to the game, Eric Reid – the outspoken activist, friend and former teammate of Colin Kaepernick, and All-Pro safety – ran out to confront Eagles safety Malcolm Jenkins.

The camera caught the two getting in each others’ faces, with Reid seemingly the instigator (as a non-captain, he was not technically “supposed” to be on the field at this time). Jenkins has served as one of the most visible leader of the Players Coalition, a group of socially active NFL players formed in the wake of Kaepernick’s protest. Reid, once a visible member himself, left the group, citing differences in the approach – he believed the group should have pushed harder to include Kaepernick in meetings with the NFL and made his employment by the league the foremost part of their agenda. Ultimately, the NFL responded as all large wealthy institutions typically do – by thinly veiling a PR stunt as social engagement, and donating $90 million in “a local matching funds component to the social justice initiative”.

After the game, Reid cited this incident and called Jenkins a “sellout” and a “neo-colonialist”, in the process accusing him of co-opting the movement for his own charity. The beef and history between the two, which stems from the NFL league office’s hijacking described above, is nuanced and complex. But this confrontation left me with quite a simple, albeit surprising, feeling – sadness.

I respect both players tremendously, and I believe in a world where their differences in approach should be allowed to not only exist, but flourish. In oversimplified terms, Jenkins has been cast in the role of the pragmatic and cooperative activist, while Reid takes a hardline about the wrongs of the entrenched power structure. To some, the Players Coalition failed in not getting Kaepernick reinstated and distracting from the genuine reason he took a knee in the first place. But to others, the Players’ Coalition secured funding from the league comparable to the amount which the league donates in their largest charitable endeavors. These are the types of philosophical differences that we hope the players – and leaders of movements generally – would hash out privately and rally behind, with the proverbially “difficult conversations”.

I believe in a world where their differences in approach should be allowed to not only exist, but flourish.

In this instance, Reid and Jenkins seemed to each serve as strawmen for a frequent divide amongst those fighting for change; the reason being that this divide remains under-discussed. Typically, when we consider our philosophical divides, we do so only as those divides pertain to opposites, whether it be opposite sides of an issue, opposite views of a person, or the “end of civil discourse” (a nebulous proscription that mainstream media loves). Once we’ve identified these differences, the prevailing narrative holds, we must “reach across the aisle”, “try to understand each other”, or “expose ourselves to different viewpoints”. In today’s media, disagreement among “reasonable” people can’t happen because we’re all too hysterical to handle ourselves like thinking adults.

Forget all that. As it pertains to politics and culture, I really have no time for people who defend, directly or indirectly, putting migrant children in cages, sexual assault, or the legal erasure of trans people. After a certain point, it feels I really can’t convince you to care more about others. A more vital discussion would occur between me and those of us who generally agree, but disagree on how to tactically address what needs to change. A successful coalition is one that incorporates people who generally agree on the big picture, but as we are all individuals, naturally tactical differences will occur.

Recent memory abounds with coalitions started on the premise of a shared general belief (or “worldview”), only to fracture due to strategic and/or tactical differences. Though it may be over-reported, the rancor between Bernie Sanders voters and Hillary Clinton voters felt very real; I’m going to guess if you had a strong predilection for either candidate over the other, you would even more strongly prefer that person be president than the one we got. This pattern seems to come up in almost every social movement in history; from labor struggles to racial justice. By the time these splits occur, it is almost always too late.

Eric Reid’s choice to call Jenkins a “sellout” was particularly fascinating. For while the NFL certainly acted cynically in co-opting the promise of the Players’ Coalition, are we supposed to believe that when Nike – another large, multinational corporation – released an ad with Kaepernick, they had suddenly been paid a visit by the altruism fairy? Powerful though these ads were, corporations don’t do things that are not in their best interests! And both Nike and the NFL reinforced this: Nike wouldn’t have made Kap the face of its campaign if they didn’t think he was marketable (Nike stock rose significantly in the wake of the ads), and the NFL wouldn’t donate to any charity if it didn’t garner good press.  At the time of the Nike ads, some called Kaepernick a sellout, as if partnering with ANY corporate brand tarnishes his reputation as a fighter for social justice, even as the advertisements brought greater awareness and spotlight to his desired goals (and greater financial means to devote to them).

In addition to the disagreement itself, I felt sadness at our tendency to even lump Jenkins and Reid together, as people who are fighting for social justice in the first place. We should all support justice for those murdered at the hands of the police and the civil rights of people of color, yet because they happen to have pointed this out in public, they are grouped together as “fighting for the same thing”. Again, nuance matters, and it remains possible that their individual versions of justice and the steps to take towards it may differ, even within the context of something we should all agree on. The range of discourse is so narrowly defined that we can’t even adequately spot the difference in people who generally want the same thing through different means, and people who are truly allied in the same fight. This flattens our discourse and makes us think everyone agrees, and thus we are simply unprepared for the inevitable moment when they don’t.

When does one become a sellout?

Clearly, the entire episode here provides more questions than answers: When does one become a sellout? When do the amoral motives of organizations looking to capitalize on a moment outweigh the benefits of their actions? At what point have those with whom we share a general goal turned their back on that goal enough to warrant aggression or excommunication? And most importantly:  if our struggles are overwhelmingly interconnected, how do we address them in a way that satisfies both of our goals and moves the needle? I don’t have answers to any of these, but I hope we navigate the difficult arrival of those questions with awareness and civility.

Who’s Sleeping With Your Man?