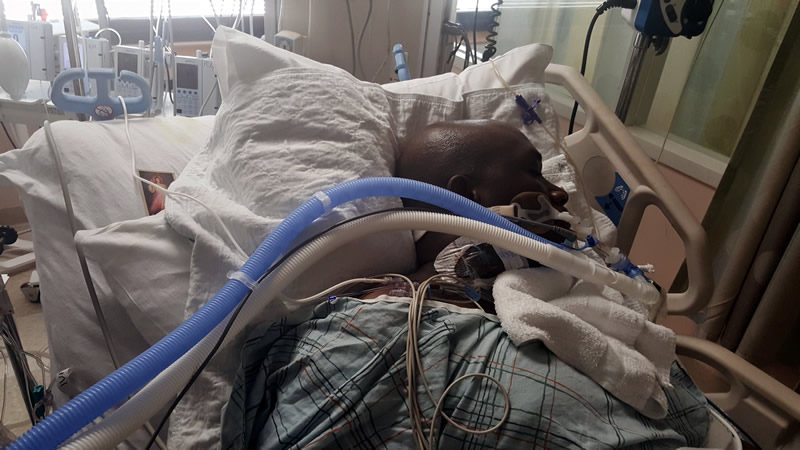 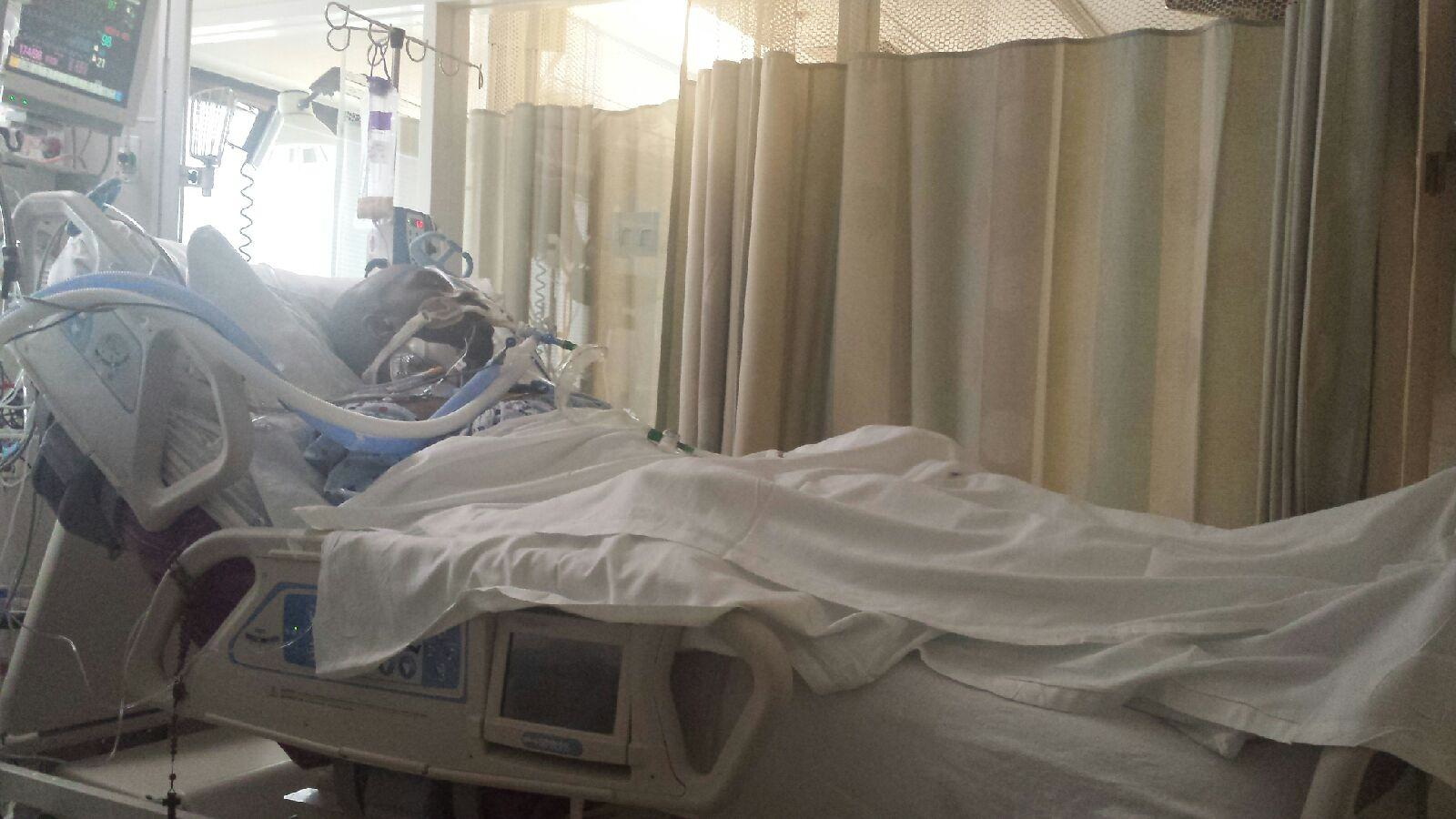 For those of you who may not be familiar with the details of my personal life, I died a few weeks ago. That’s me in the picture above just hanging out in an induced coma. You see, my heart stopped beating on the basketball court and I went into cardiac arrest. My dad had also suffered from massive cardiac arrest at age 45 but I had no idea I would beat him by six years and have one @ 39. He unfortunately did not have the luxury of dying twice. So what’s it like to die and come back and how am I even writing about dying two weeks to the day after it occurred? 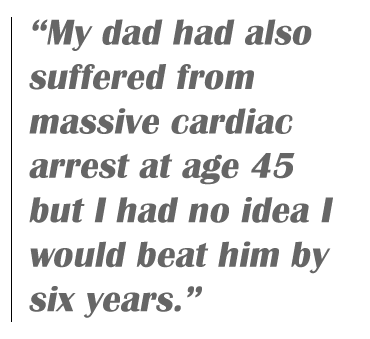 My conditions for survival could not have been more optimal.  I basically won the cardiac arrest survival lotto. If you take into account the below factors, you can understand why I say this;

Of course all that means nothing. I could’ve just as easily ended up dead or woken up a drooling, useless turnip (WTF is a turnip?) with no control of bodily functions who could barely sign his name, which was actually the case after I came to. I was asked to sign a release document the day after I came to and the best I could muster up was an “X” like a caveman. Most sufferers of cardiac arrest do not survive and certainly do not survive with all brain and cognitive functions intact. For whatever reason however and thankfully, that was not my case. According to the doctors, nurses, physical therapists and multiple healthcare professionals, I made somewhat of a miraculous recovery. It is quite frightening to hear those who are professionally schooled and trained in medicine attribute your recovery to a “miracle.” 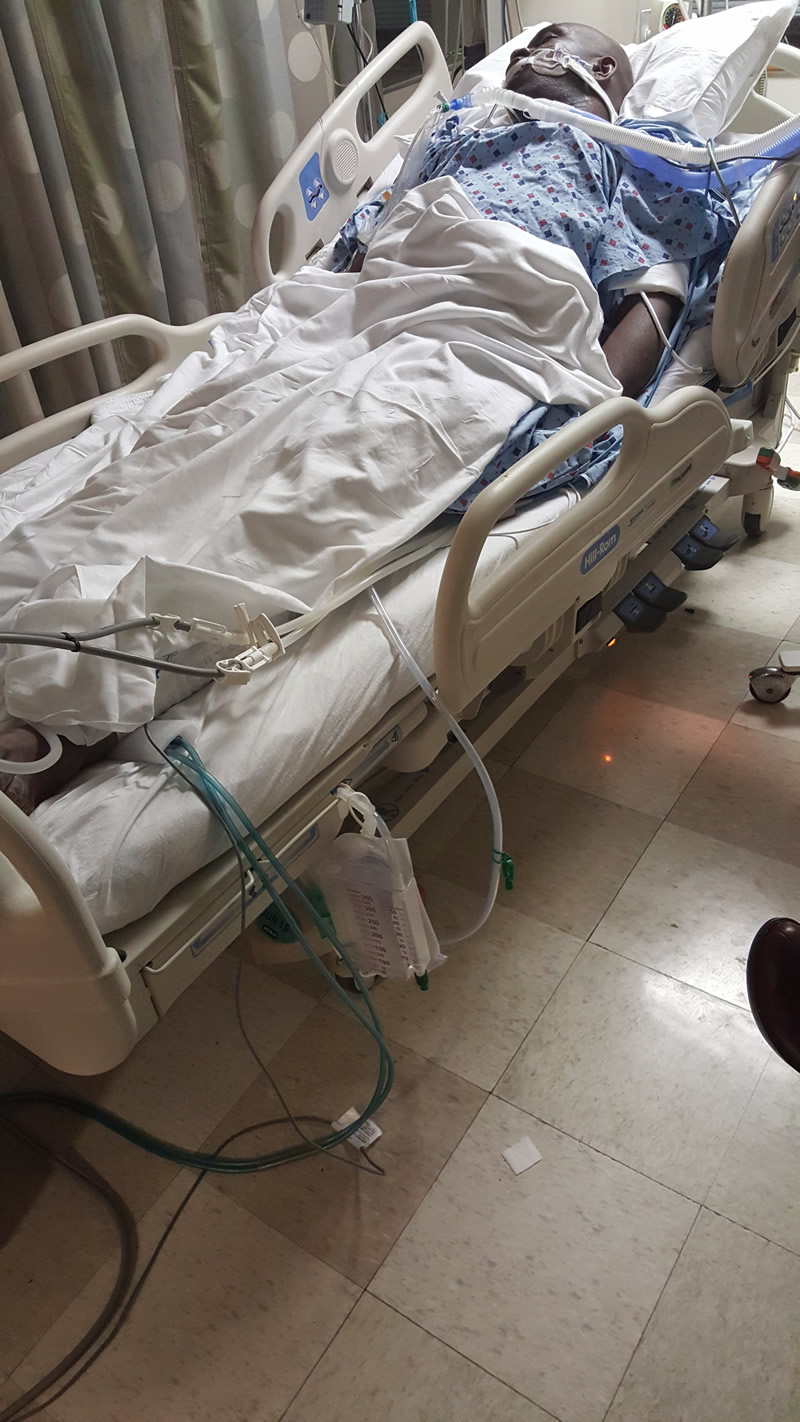 In order for me to even have a fighting chance, I had to be kept in an induced coma. While in said coma, everything was done from literally freezing my extremities with ice to pumping me full of a drug cocktail including the one that killed the King of Pop (Propofol). It would seem that my blood pressure was exceeding Ferrari test drive levels and I had to stay induced or risk the occurrence of a stroke. The adverse effects of all these drugs were some of the freakiest nightmares I have ever experienced in my life. Why the hell was I being chased by the 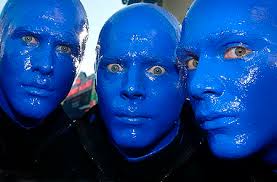 I find it hilarious that my first words after I came to were “Let me go.” Where exactly was I going? As previously stated, I literally couldn’t walk or use the bathroom on my own. Never mind the upper respiratory failure as a result of the pneumonia one gets when one swallows one’s own vomit.  I say all that to say that although “Let me go” was quite an illogical request, the fact that I was awake and using words was a welcome sight for all who were there. 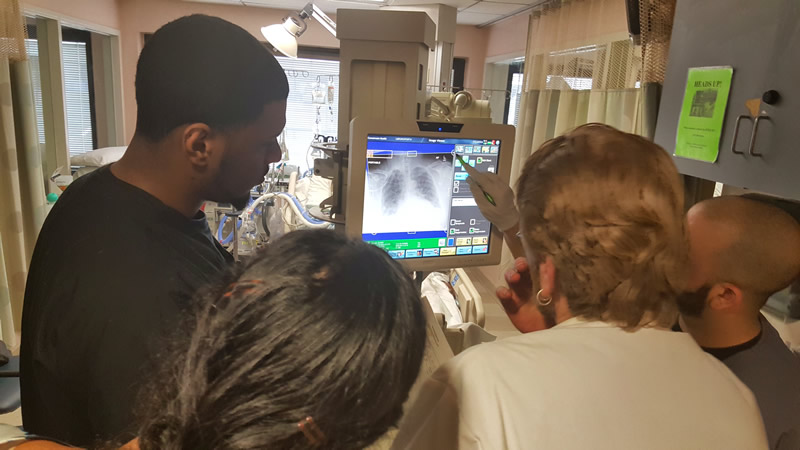 The most overwhelming part of this ordeal wasn’t going into cardiac arrest, dying, being revived, being in a coma and walking out of the hospital two weeks to the day after all that occurred (I went in on a Tuesday, woke up the following Tuesday, and was discharged the Tuesday after that). The craziest part to me was the amount of people who were genuinely in my corner. The fact that the hospital overflowed with friends and family from my room and into the hallways every single day until I woke up and days after is unbelievable. I mean I of course have close friends and family as do most but it was not the typical 5-6 people. 20-30 (and I may be understating but I’m trying not to seem arrogant) folk daily were holding vigil. I basically got to attend my own funeral while still alive. There were friends from elementary school, summer camps, high school, college, current and former places of employment, etc… It was (and still is) beyond my comprehension. When I was told I have “amazing friends” and an awesome support system, my Aunt quickly responded without batting an eyelash “It’s because you are a good friend to a lot of people.”

I have since acquired some hilarious nicknames as a result of surviving cardiac arrest and having an Arc Reactor (defibrillator) permanently installed in my chest. Names like The Iron African, Bruce Leroy, Lazarus and, of course, Tony Stark. 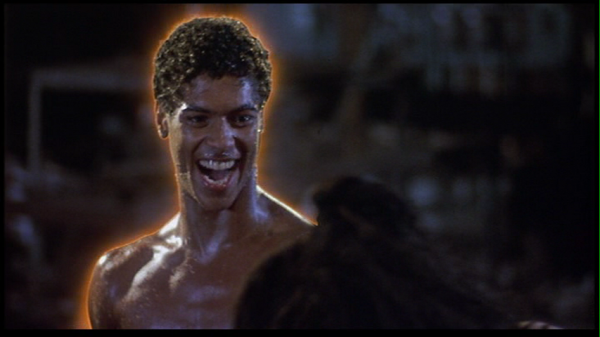 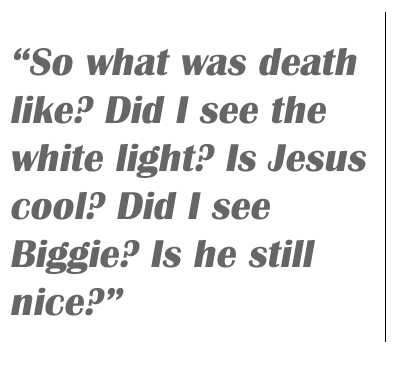 So what was death like? Did I see the white light? Is Jesus cool? Did I see Biggie? Is he still nice? What piece of advice could a dead guy possibly have for the living? The answer to those questions are A) dying sucks but only for those left behind to mourn B) yes I did but it was the white light in my hospital room C) Jesus is mad chill but has a bit of a temper D) Biggie will always be nice (I didn’t see Tupac anywhere though… hmm…).

As for my advice to the living of which I am happy to still be a member, it is simply this; no one cared that I wasn’t married or didn’t have kids. No one cared that I had never been to Europe. My family and friends simply wanted me to wake up normal. My quality of life will not be determined by a completion of anyone’s bucket list, including and especially my own. It will be determined by how I’ve treated people my entire life and I am PROUD to say that based on that, my life has been an amazing success thus far and I cannot wait to continue to be a good person to all. Also, I saw the Black Messiah (Morgan Freeman) and he told me to keep the salt and pepper beard. I am now the most interesting man in the world, dead and alive. 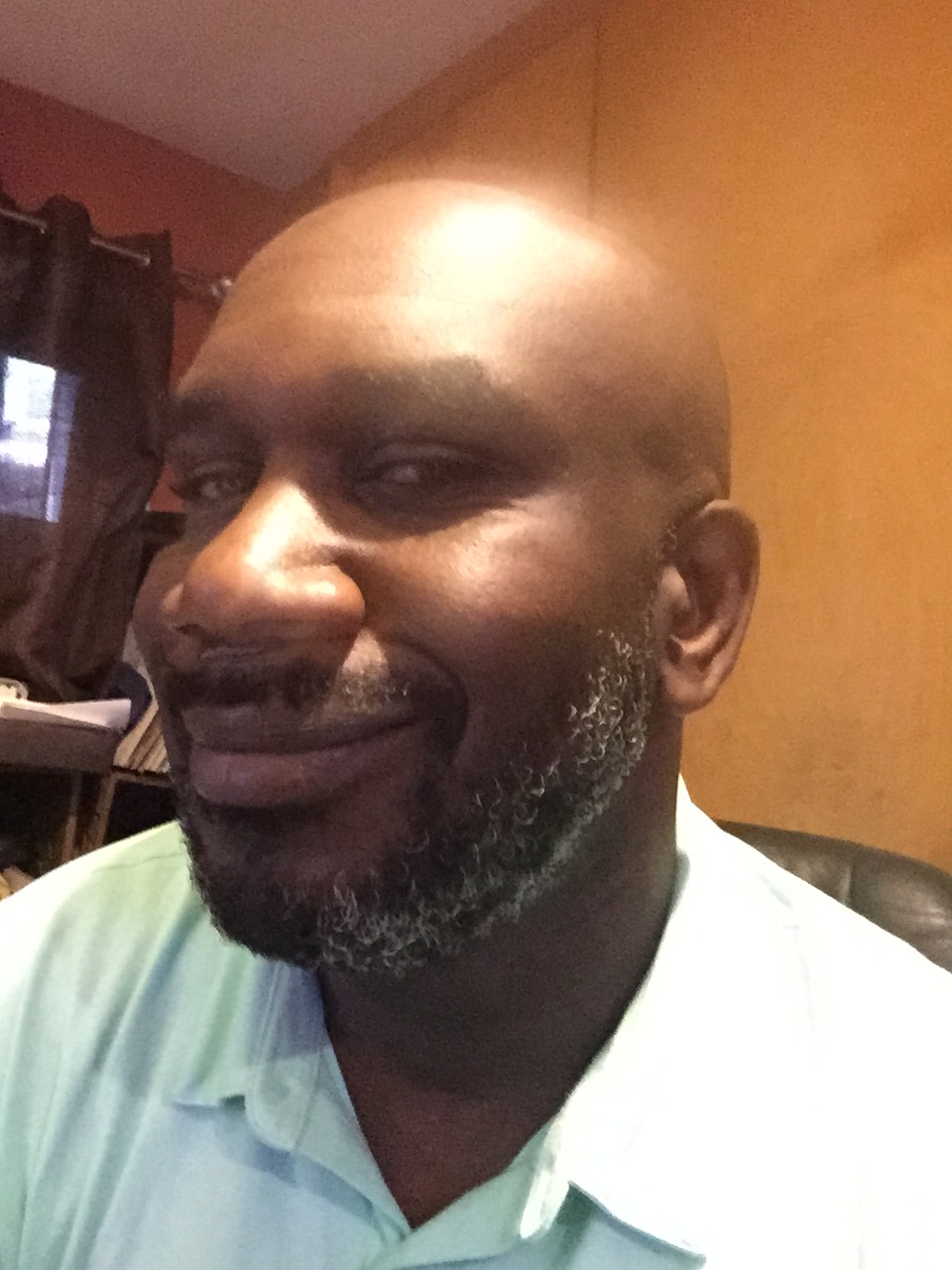 “I don’t always die but when I do, I come back to life and write about it.”

Sidebar; To the guys on the court and the staff of New York Presbyterian and Cornell Medical, I have no words and there are no words that can adequately express my gratitude for literally saving my life. Although not nearly enough, all I can say is thank you. Sidebar Complete. 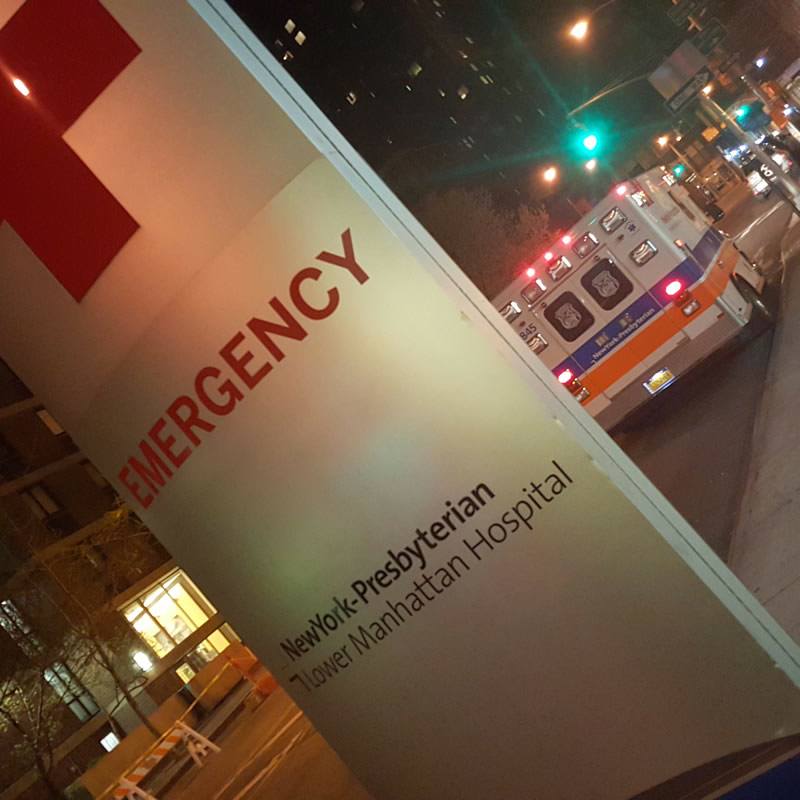 Sidebar 2: To the asshole at Boston Scientific who didn’t even let the anesthesia fully wear off before entering my operating room and instructing me on how to setup their arc reactor installed 15 minutes prior, you really couldn’t wait until I made it back to my room to close the sale? Like I said, you sir are an asshole! Also, the business side of healthcare is quite a disgusting practice and should probably be socialized. Sidebar Complete!

Sidebar 3: LEARN CPR! You may save someone’s life one day (like mine for instance). Sidebar Complete.