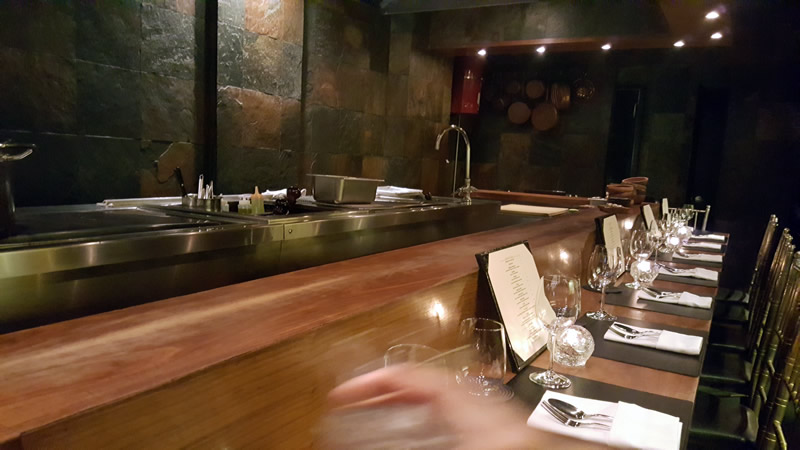 After checking out Degas’ mono-prints at MoMA, Kim and I head to the Lower East for a reservation at Degustation. It’s been a heavy week. Any excuse to lighten the mood is welcome. What better way than a tasting menu of “provocative” Iberian, French and American influenced cuisine?

“I’m looking forward to the octopus,” I say.
“And the foie with cauliflower ice-cream,” Kim adds.

We take our seats around the chef’s table, not unlike the dining experience at Momofuku Ko we had some time back. It’s just us and a few other patrons basking in the glow of some non-offensive Gen-X music barely audible through the speakers. I heard some of the same songs the night before at Surfish.

“Another Modest Mouse song. We must be the dining demographic,” I say, perusing the menu.

“I look for more in a tasting menu, maybe because I’m an over-eater.”

We go with the seven course tasting menu – and ask for wine recommendations as we’re more of a “cocktail couple.” I start with a Senca Lake Riseling from Red Hook Winery and Kim gets an Eve Charles Smith Chardonay. Later I also try the Vina Peralillo Pinot Noir from Chile. We’re wine novices, truth be told, but dug the change of pace. That being said, give me a Dirty Martini any day of the week. Two on Fridays.

I’m gonna tell you right off the bat that there was nothing off about the flavors the entire evening. Every dish was competently assembled and plated. Service was attentive with each dish explained as the appropriate silverware was placed. Wine and water refills were prompt and unobtrusive. Nothing to complain about. Yet… somewhere in the middle of the meal I realized something was missing.

The place is a bit dark with one tiny square window to the street. The open kitchen is well prepped and double teamed by two competent Chefs that tweeze tiny flowers onto seared proteins and spray plastic bottles of oils and dressings with practiced measure. It’s no more or less assembly than goes on in many other restaurants, but seeing it may take a bit of the magic away.

After two adorable oysters, the small salad of local (Union Square Market) snow peas was tasty, as was a plate of carrots with dollops of cheese. A perfectly seared scallop followed – which came with more curried sauce than the one scallop could support. Would be perfect for two scallops, I thought to myself, eating the remaining pungent sauce with a flat spoon. The use of finger limes (?) in the curry was nothing short of genius – and a spark of the aforementioned joy I was looking for. Regardless, that small salad, tiny carrots and one scallop were 43% of the meal. The foreplay was a little lacking.

Perhaps the Mackerel was more adequately sized, with a delicious sear, some fennel and radish. Pork Shoulder slathered in a chocolate mole and avocado mouse had a real depth of flavor but was gone in a matter of bites.

Someone nearby ordered the skirt steak ala cart and received a heaping plate of it. Our tasting portion was something of a sliver or two. Perfectly cooked, yes, and tasty, but more than a little bit fussy.

A small brioche crème brûlée was placed before us and Kim was startled the meal was coming to a close. Delicious, tho. A sweet caramelized french toast of sorts. Hot and gooey and soon gone.

So, by all means, check out Degustation – but manage your expectations if they are anything like mine.