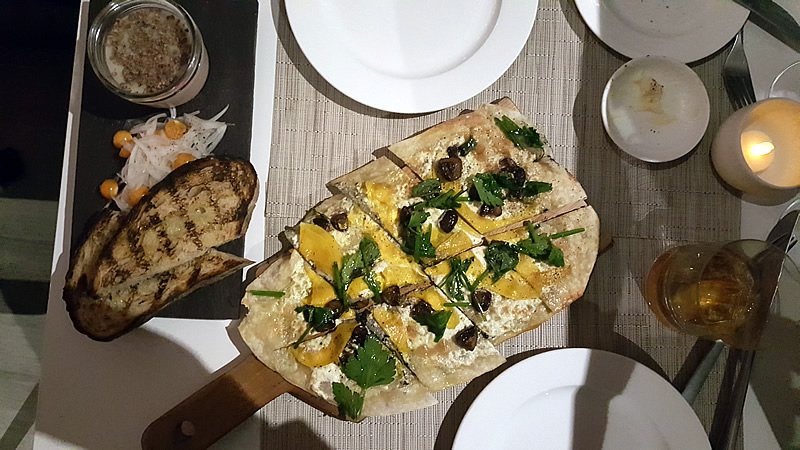 Chef Rob Newton has opened a few solid Brooklyn eateries including Nightingale Nine and Wilma Jean, two spots I totally dig. Black Walnut, the new restaurant in the Hilton Hotel on Schermerhorn, seemed like a great opportunity to expand the brand, but a little out of character. Turns out Newton brings a similar sensibility to the space along with a few hidden charms.

“Like his other restaurants, there’s a minimalism on display that lets the flavors do the talking.”

At Wilma Jean you’re gonna get some good fried chicken. At Nightingale Nine, some competent Vietnamese.  Here, catering to not just the restaurant itself, but also to room service, Newton balances on that fine line between pushing the envelope and playing it safe. Thankfully, he hits the sweet spot.

Whether Black Walnut is considered a financial success remains to be seen. The hood is still showing signs of adolescent gentrification. There are cranes aplenty, with new apartments and establishments popping up for blocks around. Is it enough to keep this spot afloat? I sure hope so. For starters, get some signage out front. Had I not been tuned into social media, or sites like Grubstreet and Eater, I would have never known about it.

We started with some smaller plates, the high-point of which was a surprising chicken liver mousse with caramelized cocoa nibs, pickles, and perfectly grilled bread. The flavors really shined through. It was bright and creamy and now I want it again.

The flatbread with roasted mushrooms, kabocha squash, mint, and parsley was also good, but maybe could have been crispier. A little bit. But the flavors were spot on and there was a lightness to it you don’t normally get from flatbread.

We also shared the dry aged burger on a butter toasted house bun with some hearty steak fries. Different enough from the solid burgers at Wilma Jean, with an aged funk that stole the show. The inclusion of pickled okra was a perfect pairing, indicative of the chef’s ability to twist expectations in subtle, thoughtful ways.

The pan roasted fluke, with unctuous chanterelles, parsley root purée, crosnes, and pickled spruce tips was light and tasty, if a wee small. That it left us wanting more is probably a good sign.

I read positive things about the aged Tennessee ham and the grilled shishitos, but we were stuffed by the end of the meal. That Chocolate Pretzel Torte will have to wait until next time.

Definitely another plus on the Brooklyn food scene.

The State of Soul Food