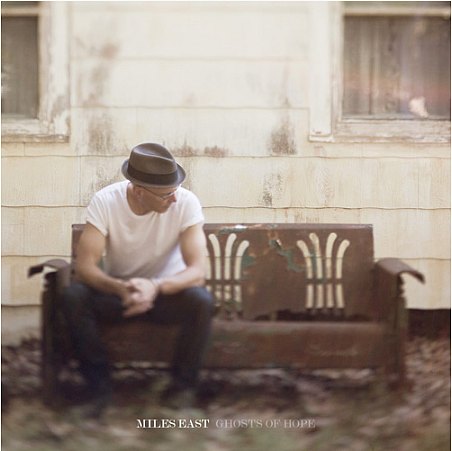 I catch up with Jonathan Ellinghaus regularly at gigs in New York where he’s either behind the drum-kit or in the crowd enjoying a rye neat. We’d seen each other recently during Blake Morgan’s residency at Rockwood.

“I wonder who the special guest is tonight,” I ask.
“Uhm… that would be me,” he says.

Jonathan is the back-beat of ECR Music Group, playing drums and percussion on nearly every release and live show like a boss. He’s something of an unsung hero, but tonight he’s singing, too, in support of the excellent new record Ghosts Of Hope.

You’re literally one of the funniest people I know, yet this record is serious business. It reminds me a bit of the dichotomy of Beck, who could do anything he wants but takes the time every few years to put some really serious music to tape.

Thanks…I really appreciate that. A sense of humor is, sometimes, a survival skill. Having one just makes everything better but without one you’re guaranteed to have a really rough time of it (that’s especially true if you’re an artist). That said, I’m not a big fan of humor in music, in general. No disrespect to acts like Weird Al––he’s good at what he does––but when was the last time someone told you how the song “Eat It” got them through a really tough time in their life. The one exception to that, with a bullet, would be Tenacious D.

Totally agree with that one. So, there’s a lot of great songs on the record and some very introspective lyrics. One of my favorites is “The Hard Part” with that amazing refrain “Close your eyes, be kind, go to a place inside your mind where I’ll be waiting for you.” What inspired that lyric?

That song is an interesting one to me. The bulk of my songs are actually retrospective. What I mean to say is that I’m not normally one to write about anything I’m going through at the time. Almost every time I’ve tried that it just ends up sounding trite, like a high school diary entry or something. In my case, time needs to pass. Sometimes a good deal of it. The aspiration is to arrive at a nuanced point of view that hopefully resonates more deeply. My favorite music has always had that quality. “The Hard Part,” on the other hand, is one of only two songs where the writing of it came out of something I was going through at that very time. My situation was such that ambiguity was simply not an option. I knew exactly where I was and I knew it was dire. I also knew exactly where I needed to be. The “I” in that lyric is the future me already in that place reassuring the current me that as bad as it is, and it is bad, I’m here waiting.

When we first met, you and the late great Jordan Berlant were banging out some pretty aggressive tunes. I’m thinking of that first Puzzelball record and Jordan’s solo stuff and even Blake’s Burning Daylight. But you’re equally adept on other side of that dynamic. You toured with Lesley Gore, for example, and you add some very delicate textures to records by Janita and Melissa Giges. And when you recently covered a Zeppelin tune, it’s not a song one might immediately expect.

The late great Jordan Berlant indeed. He is missed. He had that same dichotomy in his music too, incidentally. Well, I’m the youngest of eight so I grew up in a musical stew. The Beatles were the stock of that stew, and that honestly would have been enough but along with them on any given evening there was Zeppelin coming out of this room, Hall & Oates coming out of another, Stevie Wonder out of a third, etc. I was a drummer before I started writing music and I took it upon myself to learn the drum parts to any and all of it, from the “heaviest” to the “lightest.” It was all such great music and the instrumental parts were so varied and had such a unique influence on each song’s character. I would play a kind of drumming Russian roulette with the radio. I’d just move the dial and whatever song I landed on I had to play––and play well––on the song’s terms and not just mine. I’ve made it a point to maintain that sensibility throughout my career. The choice of the Zeppelin tune is the exception to that. I’ve been a Zeppelin fan since high school and “That’s The Way” is probably my favorite Zeppelin song, but for some reason covering Zeppelin had always been a big no-no for me. I felt that if I was going to pull this off it would have to be on my terms and not the song’s. I took a chance and played it for Blake fully expecting him to nix it but to my surprise (and his) he dug it and now it’s on the record.

Speaking of Blake, I always wondered if you two have a shorthand in the studio. In my strange imagination it feels like you have something of a Scorsese/De Niro relationship. What I’m trying to say is, you’re the Robert De Niro of drums. I’m talking early De Niro, before he started making bad decisions.

“I see my life in terms of destinations rather than journeys, like how the song “The Hard Part” deals with the place I’m in vs the place I need to be.”

Ha! Someone told me the other night that they watched “The Intern” and thought it was very cute. That’s how it is now: Sting is easy listening and De Niro makes cute movies. Well, I wouldn’t call it a short-hand per se. What we do have is a love for a lot of the same music and a unified understanding of how a drum part should serve a song. I will never take that for granted. It’s why we’ve worked together for so long. I have worked with other producers but not often and when I do it always reminds me how spoiled I am by Blake’s and my working relationship. It certainly doesn’t hurt that he’s one of my best friends. It’s gotten to the point where sometimes the right drum part comes down to one or two knowing glances.

I’ve always known you as Jonathan. What was the inspiration behind “Miles East?” Is it a pseudonym or a project name like Bon Iver or Iron & Wine?

The answer to that question is…both. I just found that as I wrote and performed my music over the years, It always ended up coalescing around a particular wavelength, one that it turns out I’ve been on my whole life. It has to do with my relationship to the waters and shores along the eastern seaboard, particularly the lower eastern shore and the north east. It’s a huge force in my life and always has been. It works its way into my music in subtle and not so subtle ways. I’ve often said that I see my life in terms of destinations rather than journeys, like how the song “The Hard Part” deals with the place I’m in vs the place I need to be. “Miles East” represents the one destination that helps me navigate between all the others and there’s only one way to get there.

Ghosts of Hope is up for exclusive pre-order today, here: iTunes.com/MilesEast.

Are Rappers Better Off Dead?