Like a lot of 6 year olds, my daughter Maddy has a very particular bedtime routine. Maddy’s is a little more routine and a lot more particular than most. She has to have her water on the nightstand and all her stuffed animals tucked in just right around her. She writes squiggly lines – or cursive writing as she calls it – in her journal BEFORE I read her a bedtime story. Promptly after story-time comes “Goodnight to Maddy,” a song I’ve been singing to her every night since she was a baby and will every night until the dreaded day she stops me. The song is followed by “snuggle time” and repeated requests for “snuggle just one more minute” until she falls asleep. It’s a lengthy process that sometimes demands inhuman patience, but I love it. I get to hear how her day was, what new things she’s learned, and important stuff like the names she gives her different types of farts. “Bubble farts” are her favorite. The other night she threw me a curve-ball.

“Daddy, can I read YOU a story tonight?” 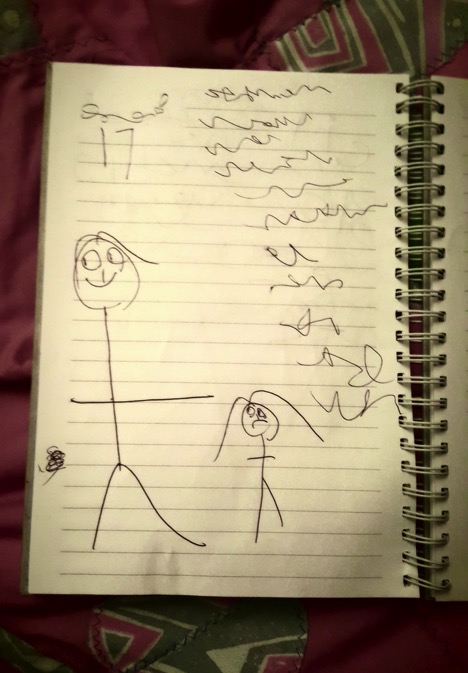 Heck yeah you can, I thought. She’s getting better at reading and I love watching her “tap out words” like she learned in school. As an added bonus, I’ll have a reason to not suffer through the GOP presidential debate, which promised to be far less educational than a kindergarten student struggling with a book.

She told me she wanted to read me her journal. I knew it was just filled with the aforementioned squiggly lines, but OK, why not. Let that imagination rip. I figured this would at least be cute. My wife was working late, so I held my phone off to the side and started recording for her to watch later, because I’m one of THOSE annoying dads that thinks everything their kid does is the best thing ever. I wasn’t expecting what happened next.

Maddy opened her journal and started flipping through the pages, looking for something among the doodles, scribbles, and random practice letters. Adorable. For the first time I noticed that her journal also had occasional numbers at the top of some pages. I would soon find out this book was much more than I gave it credit for.

In her words: “Chapter 4. When love is spreaded, people get happy and kinder.”

Love? Hold up. What? I’d better start loading the tear missiles into my eyeball cannons. This kid was going for the heart right out of the gate and I was completely unprepared. Well played little girl. And by the way, Chapter 4 rocks. You give me hope. 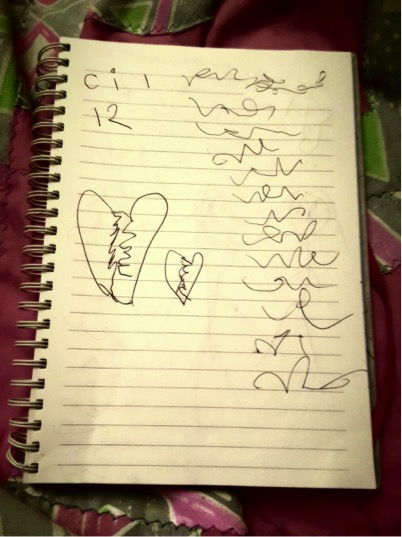 “Chapter 16. Sad, happy, anger, fear, and disgust, are all called feelings. They are like little people in your head.”

Thank you Disney Pixar’s Inside Out. My daughter is now in tune with her emotions enough for the Presidential debates where 4 of those 5 will come in extremely useful.

“Chapter 12. When someone is sad and a bigger person sees that someone else is sad, they feel sad too and their heart starts to break. They don’t feel happy but they try to cheer someone up.”

Empathy? Holy shit. My little girl just explained it in a way that even the many adults lacking it can understand. By now I had figured out this journal was not at all random. These are her thoughts. She doesn’t yet have the ability write them down succinctly but she is writing and thinking. This was important to her and she wanted to share it with me. This was awesome.

“Chapter 13. When someone has dark skin and someone has bright skin, that doesn’t mean you have to fight about it and be mean to each other. You could be friends and make a happy happy life.”

Equality. YES! My kid is not an asshole. Not that I think kids are born into assholedom. I believe ignorance is learned or force-fed. It’s just good to know that she is conscious of the fact that people are different and that it’s OK, even good. Equality – a simple idea that sadly still needs to be taught to so many these days.

“Chapter 17. When you are shy of someone else, don’t just walk away from them when you want to talk to them. They may even look angry and mean but they’re not. Just try to talk with them for a minute.” 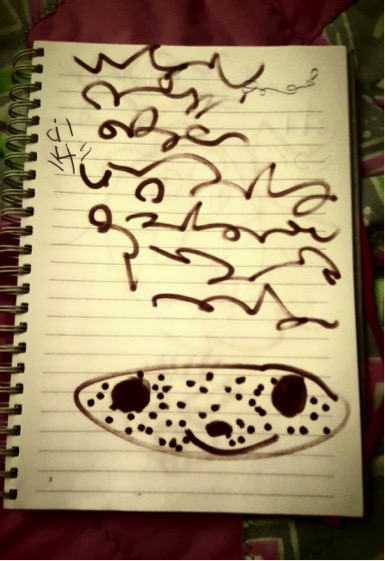 Tolerance. This kid is ahead of the game. Sure, I’m probably reading too much into this, but maybe not. Maybe in her own 6 year old way, she understands that tolerance isn’t a bargaining chip or a politically advantageous term used ironically to divide people. Maybe she’s “tolerant” because she feels being tolerant is just the natural, right way to be, even if she doesn’t know the word.

After she finished, I sang her song and we started snuggle time. I asked her, like I do every night, “What was the best part of your day?” Like every other night, she gave the same response: “Right now, Daddy.”

Those words meant something different that time. It usually makes me melt inside while proudly (being THAT Dad again) thinking she is wise beyond her years. That she lives in the moment… that’s something many adults strive for yet fail at and she doesn’t even realize she’s doing it. Just as she loves, cares, views everyone as equal, and tries to be understanding of others, she does it all without trying or knowing she’s doing it.

Then again, maybe she does. Maybe all kids do. Maybe it’s just robbed from them. She just summed up some of the most important things in life without writing a word. Things many adults will never learn or value. It’s a terrifying prospect to consider: how do I, as a parent, preserve that and protect her from losing it as many people do? How do I prepare her to weather the swarming negativity, cynicism, bigotry and loss of innocence as she grows? Is it even possible to protect that innocence?

I think of the GOP debate that night and what a hate-filled, ignorant debacle it turned out to be. The whole thing was a horrible uneducated mess. Men that want to LEAD us are given the nation’s ear and what do they do? They pound their chests and call for war, killing, hate, bigotry, and division, while making promises they have no plans to keep with no clue about how to keep them if they were actually willing. THEY are our country’s best? NO. They’re not even close to being as rational, caring, or genuine as a six year old scribbling in her journal. In reality, they are just a large part of what rips the good out of our children. In a sense, we all share some of the guilt for this. If it were actually true that they’re “only saying what people want to hear” what does that ultimately say about us? And if not, we’re still guilty of providing a spotlight to the wrong members of society.

In my extremely biased Daddy-opinion, Maddy made all those guys look unqualified and out of step with a one line summary of her efforts. After reading me her journal, she said, “I forgot to tell you the title of my journal, Daddy; “This Is Life.” 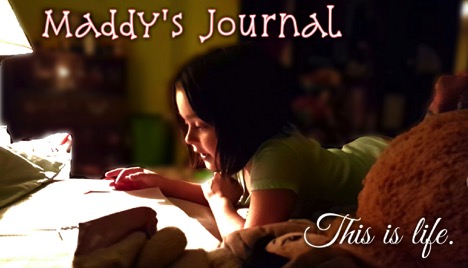 Witty observation enthusiast, U.S. Marine, steak, subpar bio writer, Brian once met Vanilla Ice at 3:30 am in a Denny's restaurant. That event did not inspire him to start writing.

You Made It A Hot Line: The Most Influential Lines In Hip Hop