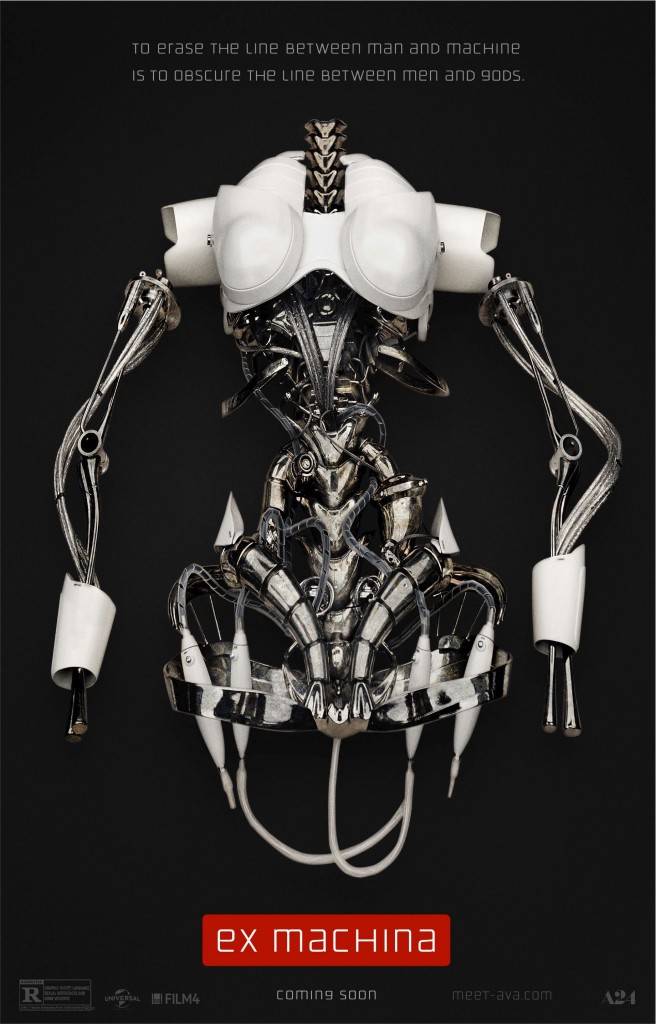 Ex Machina
Rating: R (for graphic nudity, language, sexual references and some violence)
Genre: Drama, Mystery & Suspense, Science Fiction & Fantasy
Directed By: Alex Garland
In Theaters: Apr 24, 2015 Wide Release
Starring: Alicia Vikander, Domhnall Gleeson, Oscar Isaac, Sonoya Mizuno
Official Synopsis: Alex Garland, writer of 28 Days Later and Sunshine, makes his directorial debut with the stylish and cerebral thriller, Ex Machina. Caleb Smith (Domhnall Gleeson), a programmer at an internet-search giant, wins a competition to spend a week at the private mountain estate of the company’s brilliant and reclusive CEO, Nathan Bateman (Oscar Isaac). Upon his arrival, Caleb learns that Nathan has chosen him to be the human component in a Turing Test – charging him with evaluating the capabilities, and ultimately the consciousness, of Nathan’s latest experiment in artificial intelligence. That experiment is Ava (Alicia Vikander), a breathtaking A.I. whose emotional intelligence proves more sophisticated–and more deceptive–than the two men could have imagined.

Why I Want To See It:

This movie looks like what would happen if Steve Jobs was still alive, owned Google, and was hiding away in some high-tech lab using one of his many monitored employees to test out his newest toys. Instead of a thinner laptop or a watch that does everything, he’s testing what could be argued as one of the most dangerous creations mankind may ever develop; Artificial Intelligence. Nathan (Oscar Isaac) plays the super genius Steve Jobs role and Irish star Domhnall Gleeson is Caleb, a geeky 24-year-old coder who wins the chance to visit the boss in his private lab deep in Alaska.

The development of AI into something very human has been covered before in classic movies like Blade Runner. In that movie, Harrison Ford used a test to identify rouge androids built so close to human its almost impossible to tell they’re not. The test aimed to reveal the subtle indicators that distinguish android behavior from human behavior.

The idea of a learning and naturally evolving AI was recently touched on in the movie Her. The main character in that movie, played by Joaquin Phoenix, fell in love with just the voice of Scarlett Johansson. He had nothing to touch, nothing to hold at night, just a sexy understanding voice.

In Ex Machina the female robot is Ava played by Alicia Vikander, and we get to see her in the “flesh” as she tries to turn the tables on her creator and his test subject. It looks like this movie could explore any number of AI ideas and questions. Can Caleb really love something that has no soul? Can Ava really feel or understand what love is? And if she can, what does that say about the idea itself? If a machine can replicate enough human emotions, does that make it human?

With futurist Ray Kurzweill predicting the coming Singularity, which is the combination of human and machine, this subject will eventually become more actual science than science fiction. Proven theories like Moores Law are bringing us to a place where it’s only a matter of time before our computers surpass the limitations of the human brain. IBM Jeopardy champ Watson is a real life example; the dawn of next level AI is already here.

I’m hoping director Alex Garland, who reinvented the zombie film with 28 Days Later, can show how the thin line between human and machine may be crossed in the very near future.